The I. ROEMERCOHORTE OPLADEN e. V. ("First Roman Cohort of Opladen") is a historical society which aims to reconstruct the equipment, the way of life and the everyday duty of the Roman Army and its civilian surroundings by re-enacting ancient Roman life as authentically as possible. For more than 30 years this has been done by reconstructing several items of daily use, both large and small. Many activities are carried out in cooperation with archaeological museums, where we then present the results of our work to the public.

Our representation of Roman military life is not based on an exaggerated militarism of the re-enactors, but only on historical and practical reflections. Viewed historically, the Roman Army did much more than typical soldier duties. Members of the Roman Army, especially the heavy infantry of the legions, did not perform strictly military tasks, but were also involved in the building and repairing of military infrastructures, such as roads and fortifications, as well as protecting the civilian population in nearly every province of the Roman Empire. The engineering work of the army should not be overlooked, especially within the frontier provinces of the empire. It was the army's protection and manpower that made urban life possible in these regions. Without the Roman Army going forth as a pioneer corps, cultural torchbearer, master builder and watchful guard, the culture of Mediterranean Rome would never have spread so widely or thoroughly across Europe.

Furthermore, a believable presentation of typical Roman civilian life in its urbanized surroundings would demand permanent, local reconstructions, requiring a great deal of money in order to present only a few aspects of civilian life in a realistic way. Unfortunately, permanent structures like this, at a fixed location, have a limited availability to the general public. However, as a temporary military marching-camp and a contingent of camp-followers, it is possible for us to re-create a wider and more complete picture of civil-military life in provincial Roman areas at a relatively low cost. This mobile way of presentation can be set up at different locations and is therefore available to many more interested spectators.

Based on this philosophy, I. ROEMERCOHORTE OPLADEN e. V. endeavors to reconstruct an ever more realistic vision of Roman life. This is accomplished through careful studies of the military's equipment known to archaeologists, through a continuous accumulation and perfection of our equipment and through our own practical experiences. We then present this to public audiences as "living history". Due to the never-ending interest in ancient Roman life and the enthusiastic research and dedication of our members, who come from all professions and age-groups, we are able to bring provincial Rome back to life. 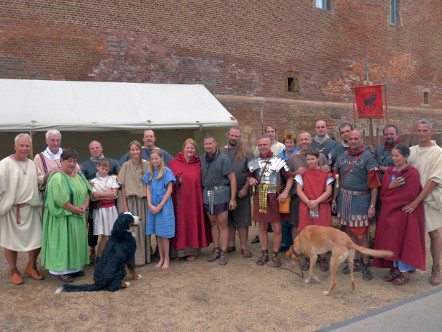