The equipment of a roman soldier contained clothing, offensive weapons and the so-called defensive weapons. The legionary at the imperial age is a heavy infantryman and uses a helmet, a body armour and a shield to be protected and a short sword as well as one or two spears for throwing to attack. A dagger is not suposed to be standard equipment but might have been used, too. Additional armour for arms and legs were not in use before the middle of the imperial age. Equipment for auxilariy units was not fundamentally different from the legions. Light infantry just used a lighter type of shield and a lance for stabbing instead of a spear for throwing. Additionally the cavalry used a longer swort instead of the typical short swort, because they had to reach their enemies from the back of their horses. We cannot address the roman army as beeing uniformed as we would understand this term today. New recruits might have been equipped by state with armour from mass production, but in general equipemtn was personal property of the soldiers and payed by themselfs. So it is most likely that new types of equipment could not be introduced overnight, but only as a substitution for old and damaged pieces of equipment or in single cases if new troops have to be equipped.

Therefore the equipment used in the second half of the first century AD may have contained pieces of older periods as well as newer equipment introduced in the middle of the century. According to this consideration, the pool of equipment of the I. ROEMERCOHORTE OPLADEN e.V. contains many different pieces of equipment from various points of time. For example, helmets of the older type Hagenau (Coolus) are used beside the newer ones of type Weisenau (imperial-gallic). The older chainmail (lorica hamata) is used as body armour as well as the younger lorica segmentata. As offensive weapons, both swords of the older type Fullham and the newer, more functional type Pompeji are in use.

On marches the soldiers had not only to carry their clothing and armour, but additionally their marching packs (sarcinae) with many more things. A big bag was used for the paenula (soldiers cloak with hood), surrogate tunicas and perhaps a pair of trousers or gaiters (tibialiae) if it gets cold. To have a little bit comfort in the tents, skins and blankets could be carried along. A bag of leather was used for small utensils and tools like knifes, cutlery, flintstones as well as personal things and money. Rations of food were stored in the bag, too, or in a net (reticulum). The latter keeps them well ventilated and prevents rottenness and decay. Liquids were carried in different kinds of water bottles made of ceramics or the bladder of animals. Furthermore each soldier carried a casserole (patera) as universal crockery for eating, drinking and cooking and a pan or bucket (situla) for the preparation of meals. In some cases the soldiers had to take pioneer tools as well, but normally these tools were transported on pack-animals together with the other heavy pieces of equipment (tent, palisade poles, grain-mill). When completely equipped with weapons and armour, his marching pack with rations of food for several days and without additional pioneer tools, a roman legionary had to carry about 40 to 45 kg. 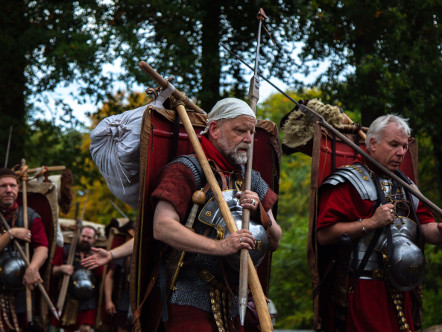 In their presentations, the members of the I. ROEMERCOHORTE OPLADEN e.V. use marching packs in different configurations. Some of them are prooven to be useable and complete by experimental marches. The individual interests of the members of our society result in a great amount of different pieces of clothing, tools and personal things. Especially this details of equipment are designt to come as close as possible to an original finding and to bring interesting and exciting aspects of history back to life. 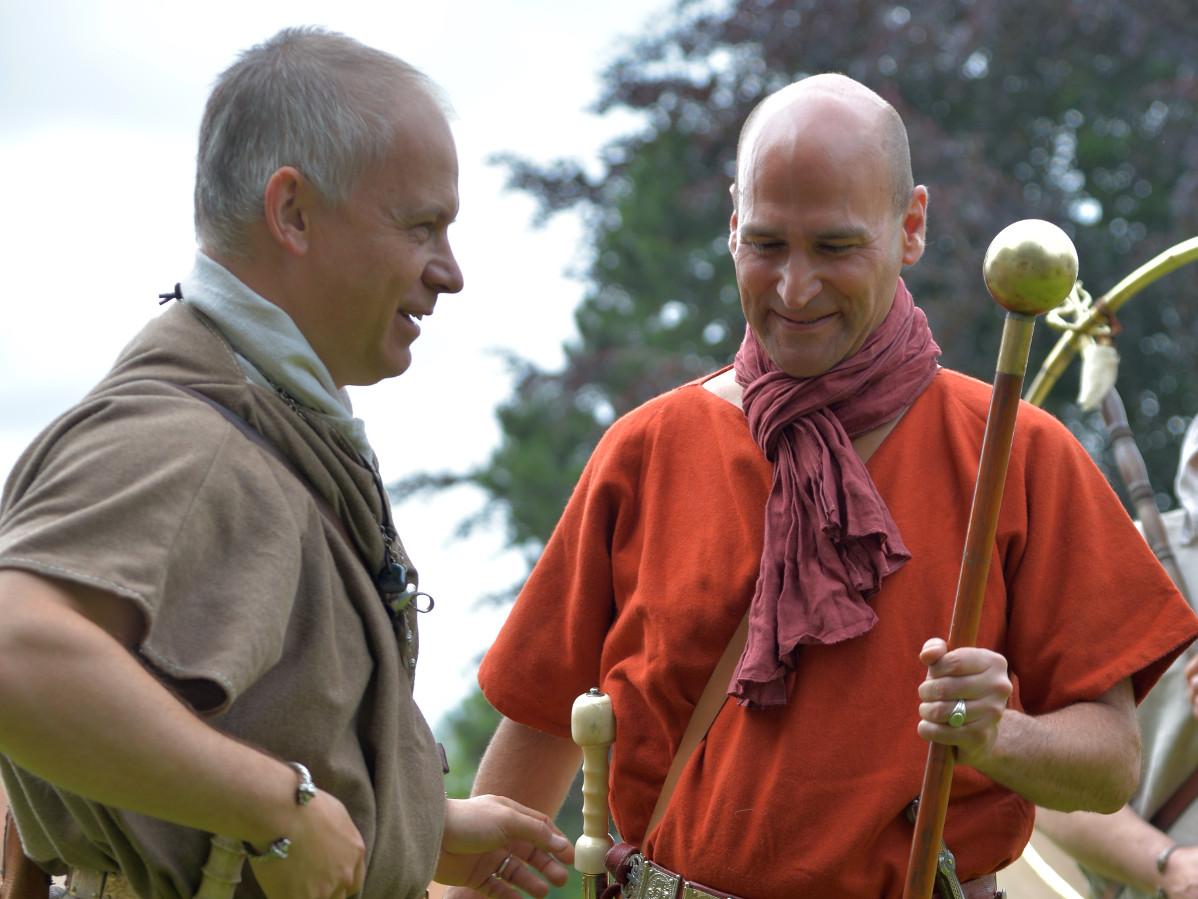 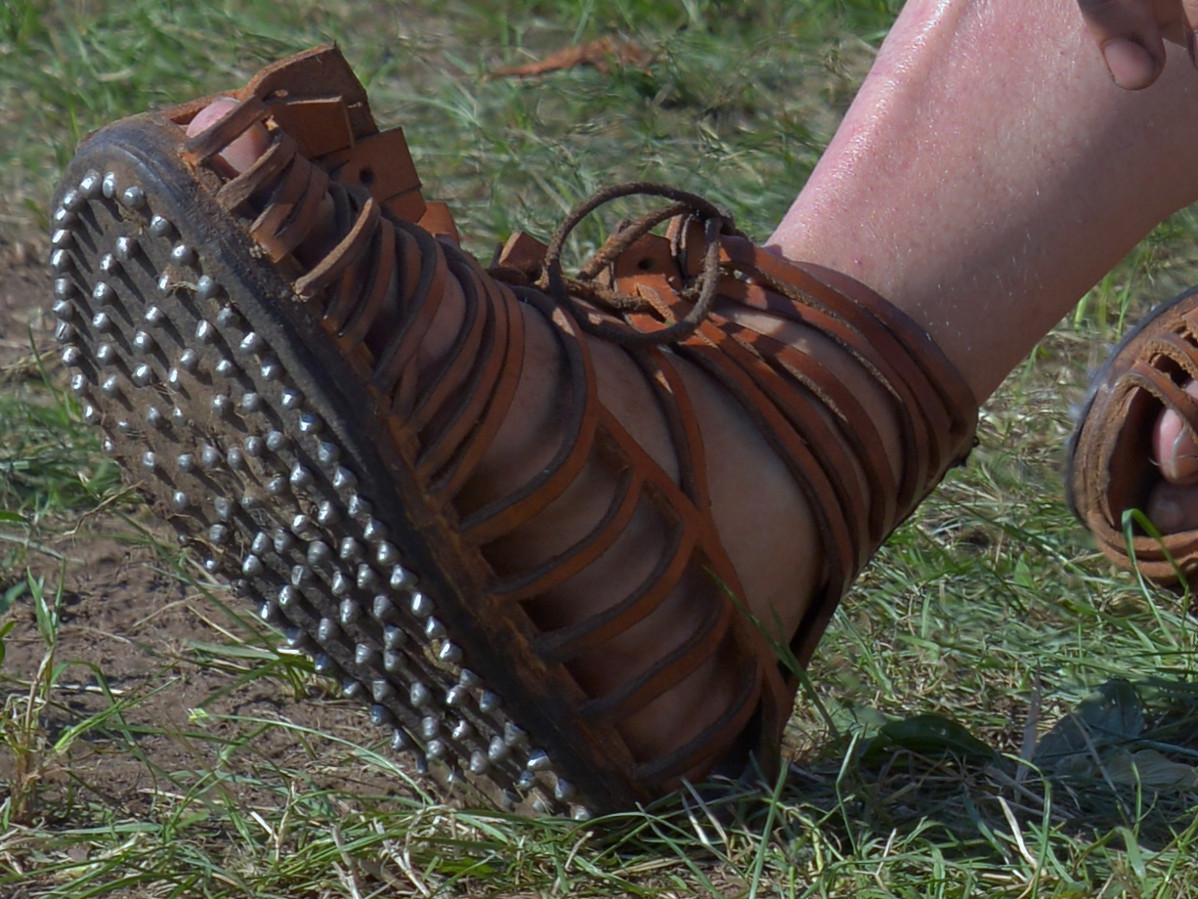 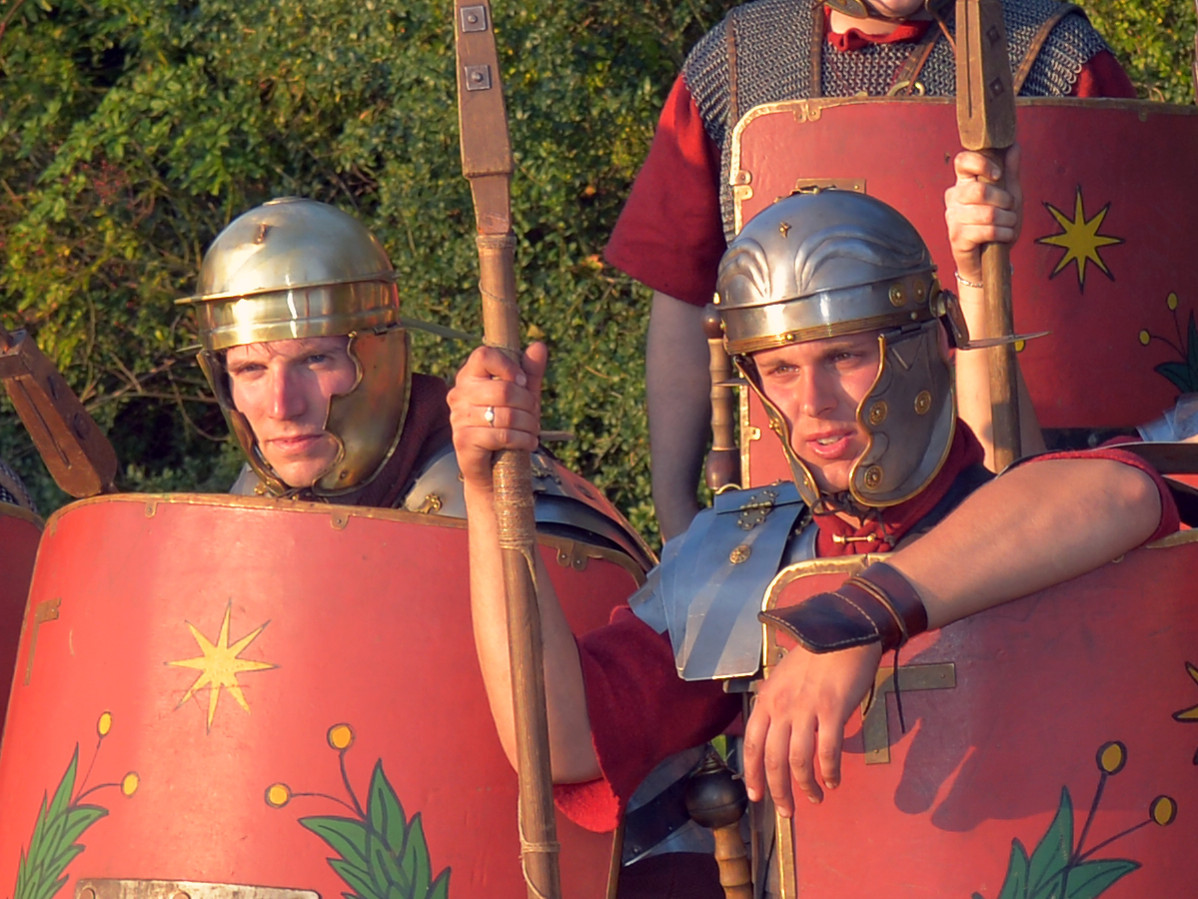 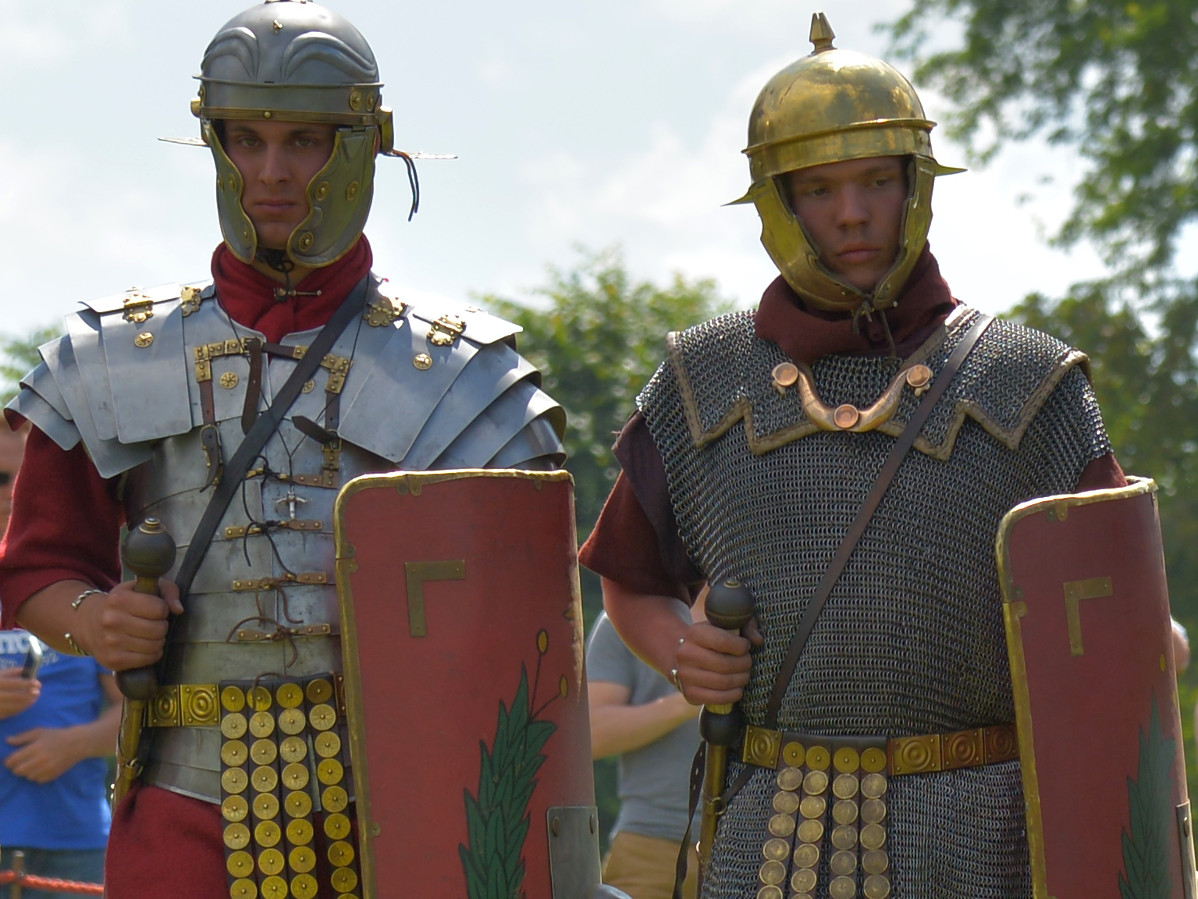 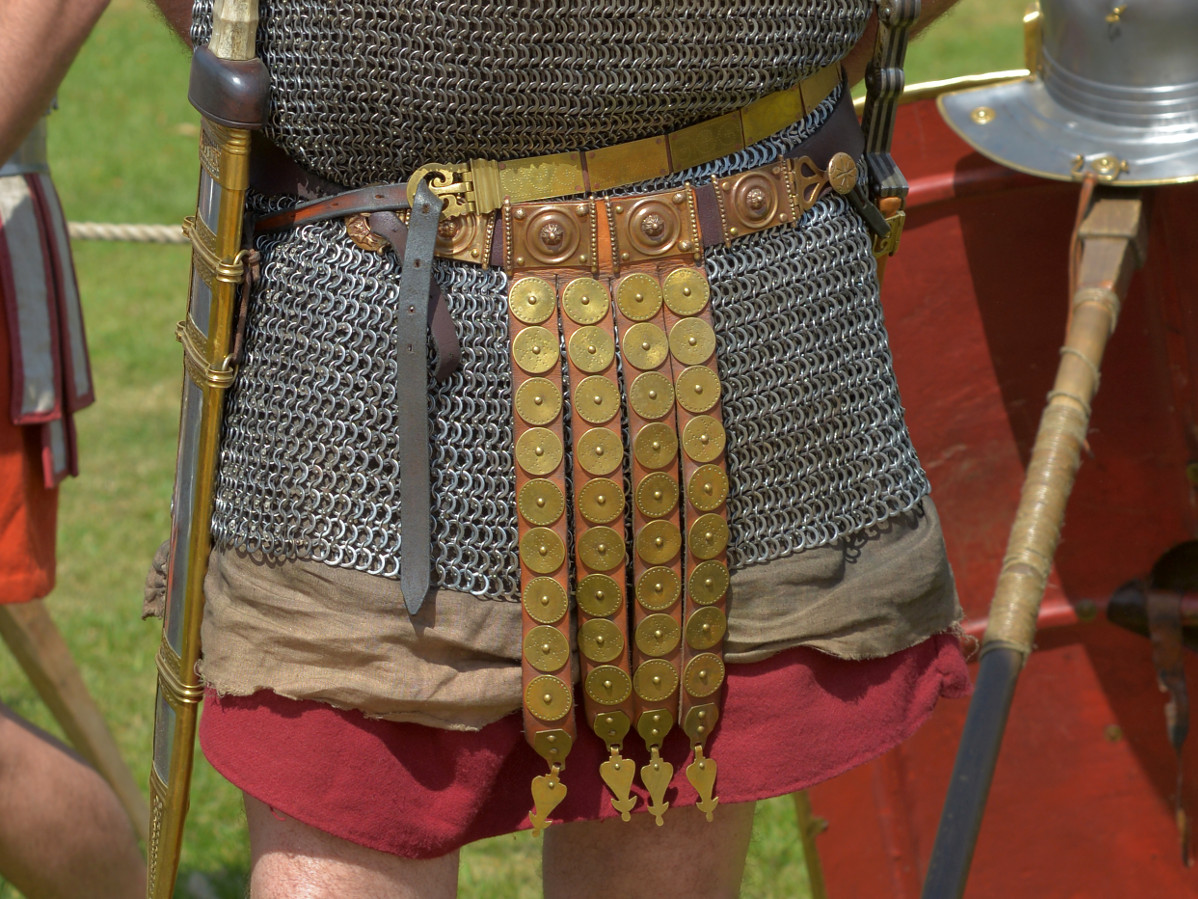 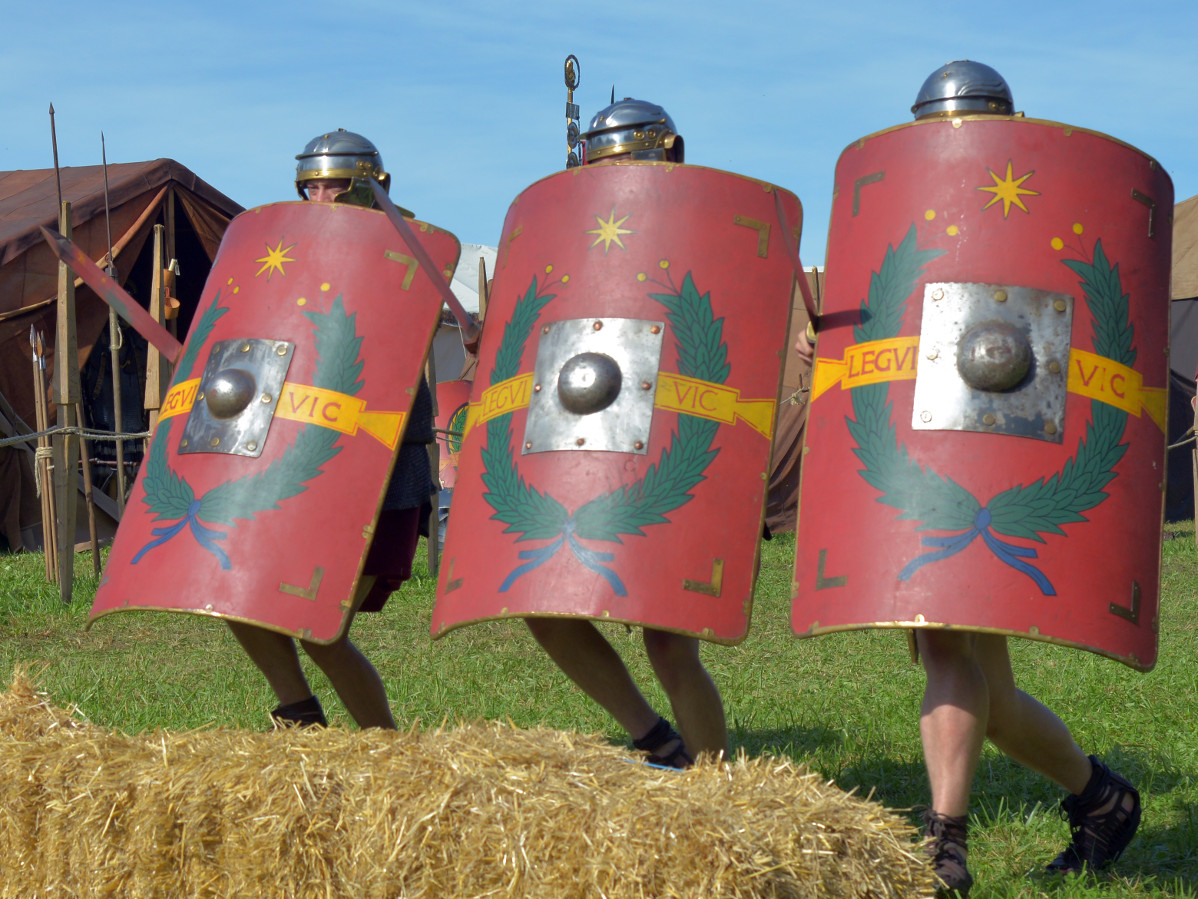 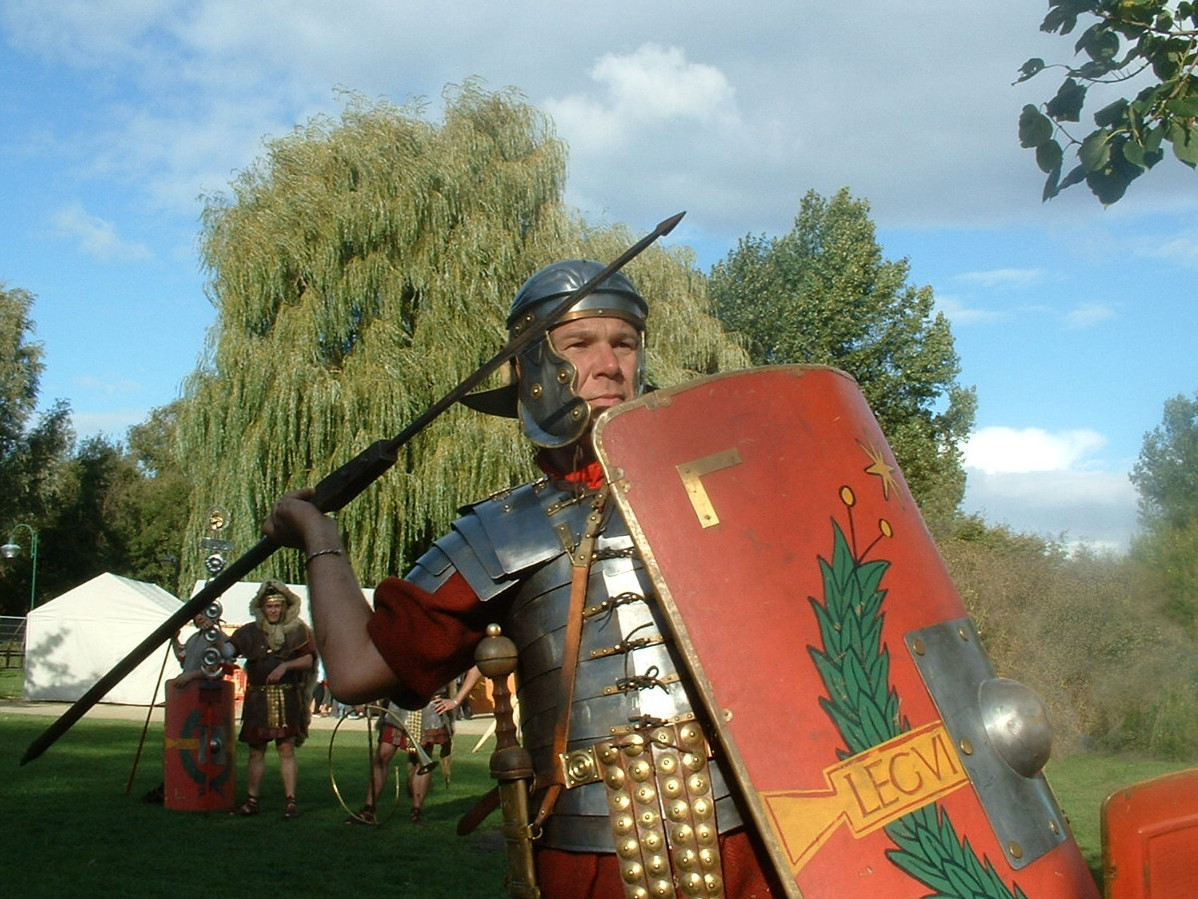 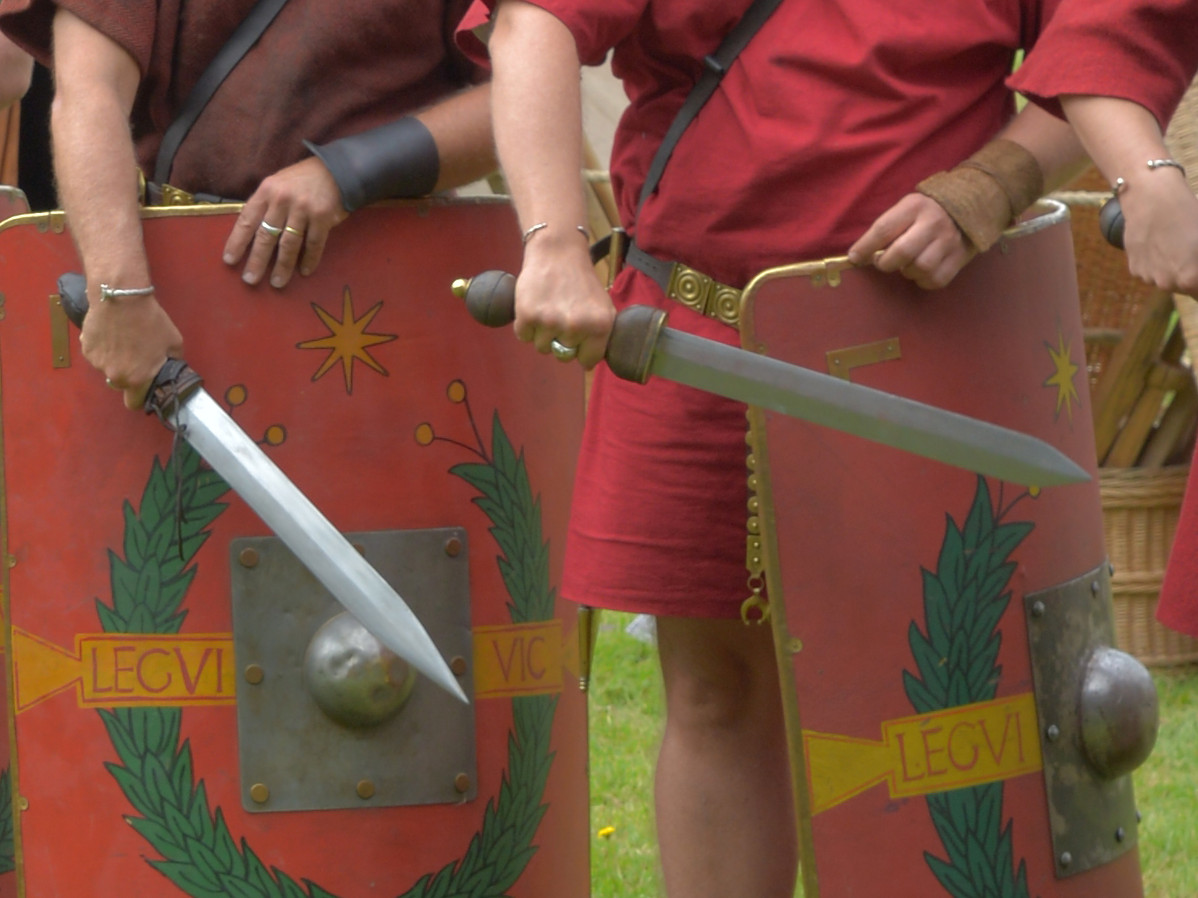 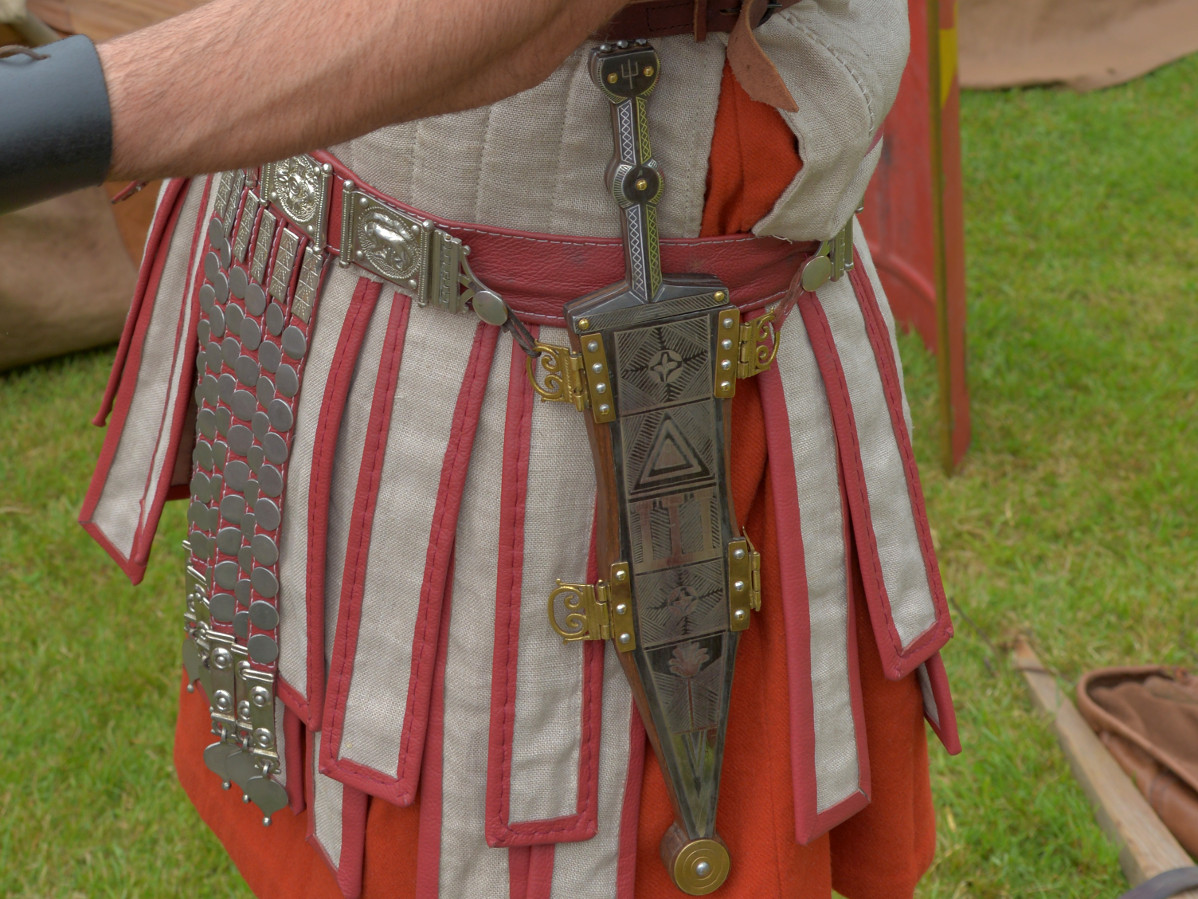 The mainly woolen tunica was the most common clothing for all romans. Differences between soldiers and civilists can just be noticed in its length: military tunicas ended above the knees, civilian tunicas were longer. Precise colours for tunicas are not known, but some small finding point to a shade of red. A second tunica made of linen could be worn below the woolen tunica. Shorts were known but not common for soldiers. A woolen or linnen scarf was also part of the soldiers clothing. It protected the neck both against rubbing of the own armour and against impacts.

The footgear of roman soldiers is not sandals but boots (lat. "caligae"), whose upper leather is made out of one piece of leather. The sole is studded with nails to prevent abrasion. Since the upper leather is cut to stripes the feet are well ventilated and supplied with blood. So if he keeps his feet dry, a soldier would not get cold feet.

The roman army knew several different types of helmets (lat. "galea" or "cassis"). Some of them existed parallel, some consecutively. They are named by period of their existance and/or by the location of an archaeological finding. The most common types in the first century AD were "imperial-gallic" and "Coolus". These helmets provide an optimal protection for the head by their cheek plates surrounding the whole face and by the wide neck guard. Furthermore they have a protector at the forehead that leads frontal impacts to the side and protects against hits into the face.

In the first century AD the roman army mainly used two different types of body armour: The armour of iron stripes (lat. "lorica segmentata") was invented at the beginning of the imperial age and a very common type of body armour during the first century. It consists of several strips of iron which are riveted to strips of leather at the inside of the armour. Although the single stripes are inelastic, the whole armour is very flexible and offers good liberty of action. Depending on the strength of material the armour weights 9 to 14 kg. Chainmail (lat. "lorica hamata") is an older typ of armour than the lorica segmentata but although very common. It is even more comfortable to wear but cannot guarantee to protect against being wounded by stabbing. In most cases, a mail shirt is made of 20000 to 30000 rings of iron. Scale armour (lat. "lorica squamata") was known but was very rarely used in the legions. Some auxiliary units might have used it much more.

The soldiers belt ("cingulum militare") was a sign of their profession for the soldiers. Some findigs were very costly decorated with beautiful metal plates, which stresses this relevance as asymbol of prestige. The small apron of leather stripes at the front side of the belt were most likely some kind of psychological protection rather than a real cover.

The rectangular shield of the legion (lat."scutum") and the round or oval shield of some auxiliaries and non-commissioned officers lat.("parma") were the main defense weapons for body protection. A legionaries shield is made off three layers of wood (lime plywood), covered by linen and leather and surrounded by a metal bordering. Together with an additional leather cover ("tegementum") it weights 7 to 10 kg. It is carried with the left hand and straight left arm. Additional straps of leather are only used to transport the shield on a march but not during a battle.

The spear (lat. "pilum") for throwing was the main offensive weapon of the legionaries. It was thrown salvoes out of the line-up on distances up to 30 meters to prepare the close combat. It aimed to take away the enemies cover (mainly the shiled) and not necessarily to hit and ingure the hostile soldiers directly.

The sword used by the roman legionaries was a short sword (lat. "gladius") and originally invented by the Iberians. It was mainly used for stabbing because the roman army used to fight in lines of soldiers: the own big shield protects the soldier while he tries to stab above or below this shield. It is nearly impossible to strike out inside this tight formation, as it would be necessary for beating. For the same reason the sword is carried with a belt over the shoulder on the right side of the body and can be drawn like a revolver out of this position. Depending on design and the rank of its owner, a sword and especially its scabbard could be decorated very carefully.

According to todays knowledge, a dagger (lat. "pugio") might have been a piece of decoration rather than a weapon. It could only be used as a last chance in close combat. Original findings of daggers are sometimes decorated very costly, which stresses their importance as a symbol of presige. The dagger was carried at the left side of the belt.

You are here: Home > Military > Equipment