Besides the power of heavy infantry, a very sophisticated technical equipment was one of the strong points of the roman army. Light arrow ordnance was used as well for attack as for defense and were carried along by both legions and auxiliary units in great quantities. Known archaeological evidences and ancient pictures range from very light guns that could be handled by a single man over mobile ordnance, that was transported on trolleys to heavy ordnance of 10 meters height or even above. Heavy ordnance like this was only used in siege warfare and was assambled only for usage at the siege side by the technicas of the legions. In normal cases only the metal parts of those weapons were carried along for logistic reason, whereelse wood for the structure and stones for the ammunition were obtained locally.

The great majority of roman artillery consisted of so-called torsion weapons. On a first glance they seem to look similar to big crossbows, but actual they do not have an elastic bow like these. Instead of that the chord tightened between two disjoined clamping levers, which stick inside twisted sheaves of rope. This way of construction is the source for the name "torsion weapons" (lat. tormentum) from tordere for "to drill" or "to twist". When the chord is drawn, the levers work like toggles and the sheaves of rope are twisted even more. If the chord is released, the torsion energy of the sheaves moves the levers forward very rapidly. The chord is accelerated and pushes the bullet forward. The result is a direkt shot and not an indirect throw like in other types of artillery. The torsion technique is optimal with respect to physical aspects, because it needs only few amounts of material and space to store a high amount of kinetic energy with a mechanical device.

During a period of three years, members of the I. ROEMERCOHORTE OPLADEN e.V. reconstructed a roman ballista. It is one of the largest reconstructed torsion weapons world-wide, that is used continuously. The reconstruction followed the traditional instructions of the ancient engineer Vitruvius (de architectura libri decem), who was member of Ceasar's army in the first century BC and presumably responsible for the construction of siege weapons. Our piece of artillery is designed for stone balls of 8.5 roman pounds (= about 2.8 kg) and has a weight of about 1000 kg. The maximum distance for ordnance like this was about 700 m accoriding to ancient reports and modern calculations. But effectiv power and accuracy got worse for high distances, so at normal circumstances a weapon like this would have been used on 300 or 350 meters. In any case, the heavy ordnance would have been outside the maximum range of hostile archers and could be handled without great danger. For safety reasons our ballista is only used on distances of 130 m or shorter.

Presumably a legion had 10 pieces of heavy ordnance on their disposal, that were used in batteries. They were used to destroy weak parts of a fortification or its interior buildings. It is not possible to use those weapons against single persons, because they lack of possibilities to correct the trajectory to the left or right and the shooting frequency is to low. Just as little they can be used to break massive stone walls with their small stone balls. In contrast the psychological effect of a continuous fire with stone balls may not be neglected. 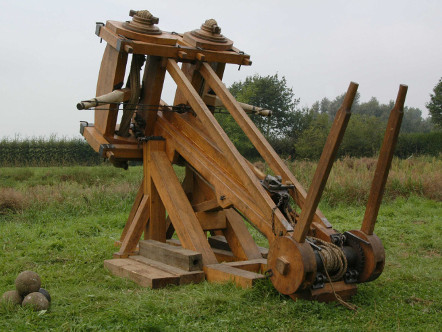 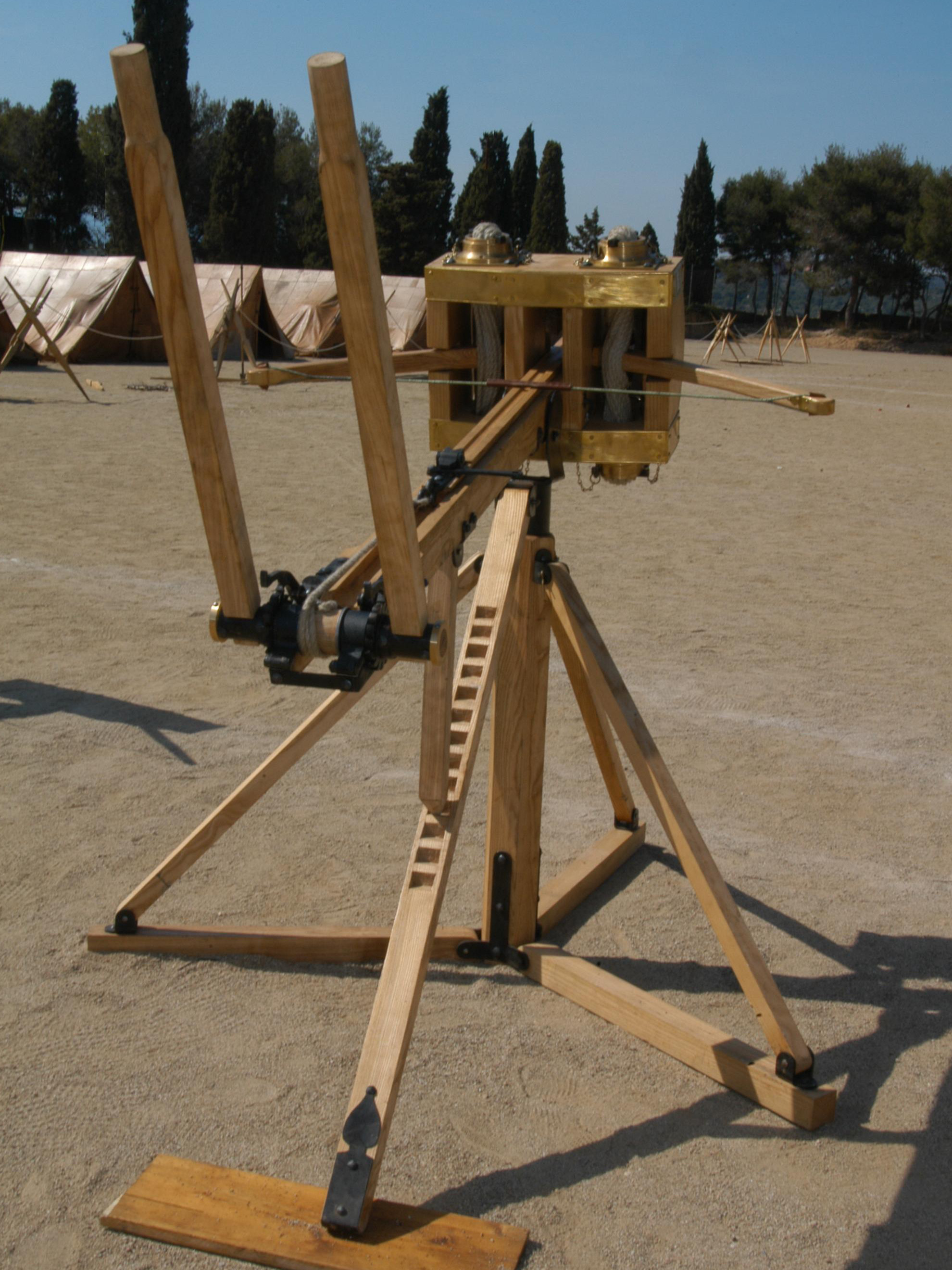 Another piece of artillery in the pool of siege weapons of the I. ROEMERCOHORTE OPLADEN e.V. is a reconstructed scorpio. It is build following archaeological evidences and ancient descriptions from the time of Vitruvius and the first century AD, too. This light ordnance uses arrows that are about 60 cm long, 2 cm in diameter, 200 g heavy and that have a forged iron head. Ordnance of this kind could reach at most about 300 m and could be used effectivly with high accuracy on distances from 120 to 150 m in a battle. The whole body of the scorpio is set on a column and can easily be turned to left and right, so it is possible to use this weapon against single persons at least on short distances. The high speed of the arrows gives them no chance to escape. Experiments done by our society showed, that arrows shooten on a distance of 50 m are able to break through iron plates which are 2 mm thick. So even against heavy armed enemies a scorpio would be a deadly weapon at least on this distance or shorter.

As well as heavy ordnance the light arrow ordnance could be used in batteries, too, but they could be used both for attacks and for defense in open battles or siege warfare. For example they can create a very effectiv curtain fire that doesn't allow an enemy to use a bridge or to hold an exposed position. It might be possbile, that every centuria of a legion or auxiliary unit carried along one piece of light artillery. Either they were dismountable like ours or they were mounted on trolleys.

In 2000 a extraordinary small torsion weapon from the early imperial age was discovered in a gravel pit near Xanten. This piece of artillery was well know by its latin name manuballista soon. It could handled by one man and was persumably used in the same situations than the larger scorpio. The unique and quite perfect circumstances of this finding perserved nearly the complete wooden head box as well as parts of the slider and its base. The completeness of this unique discovery allowed the very detailed reconstruction of two pieces of artillery, that were completed by members of the I. ROEMERCOHORTE OPLADEN e.V. in 2007. As well as the bigger ballista and scoprio, this weapons are usable, are currently tested on distances of 50 m and will be explained and demonstrated during the presentations. 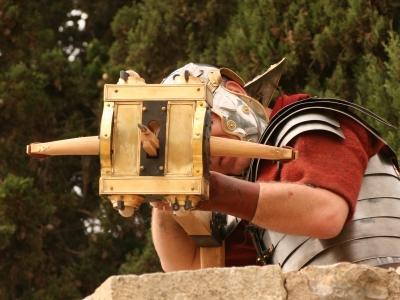 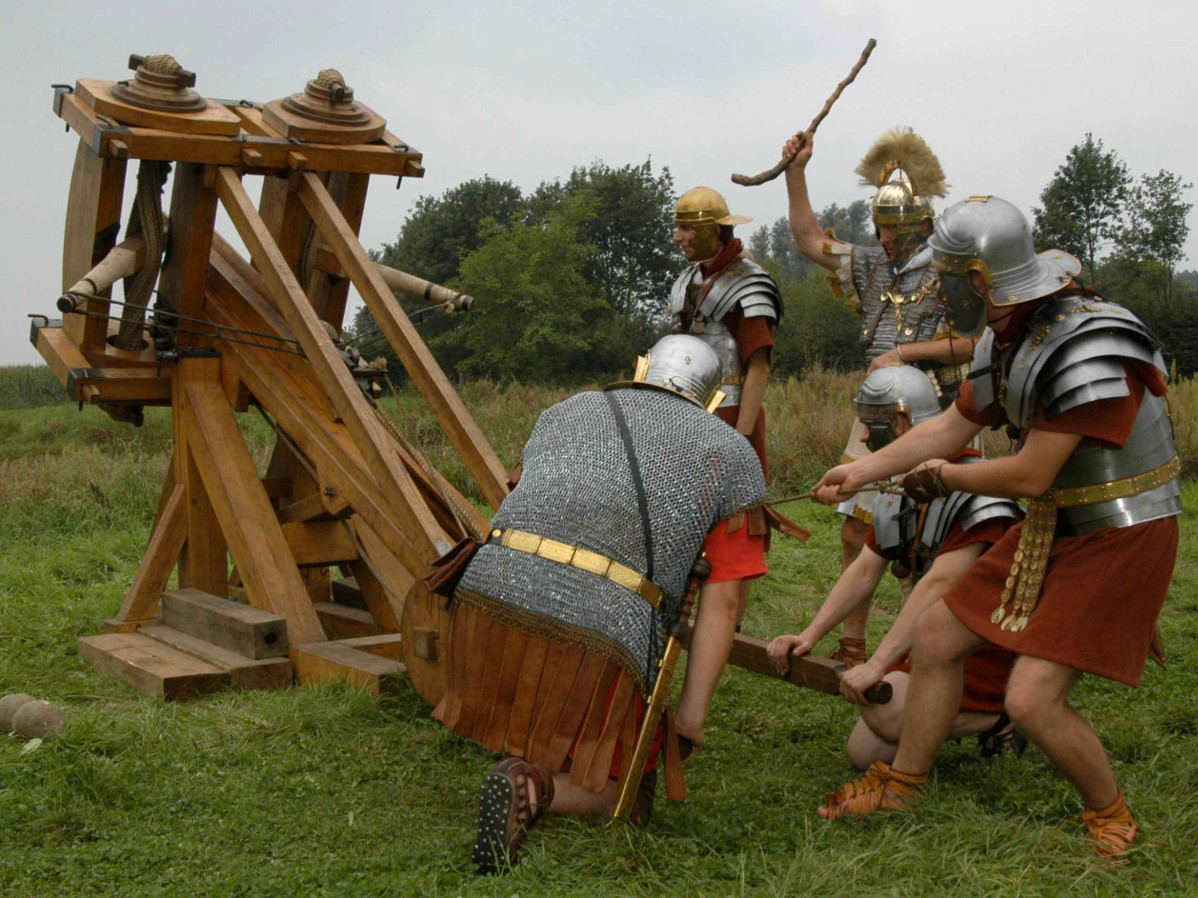 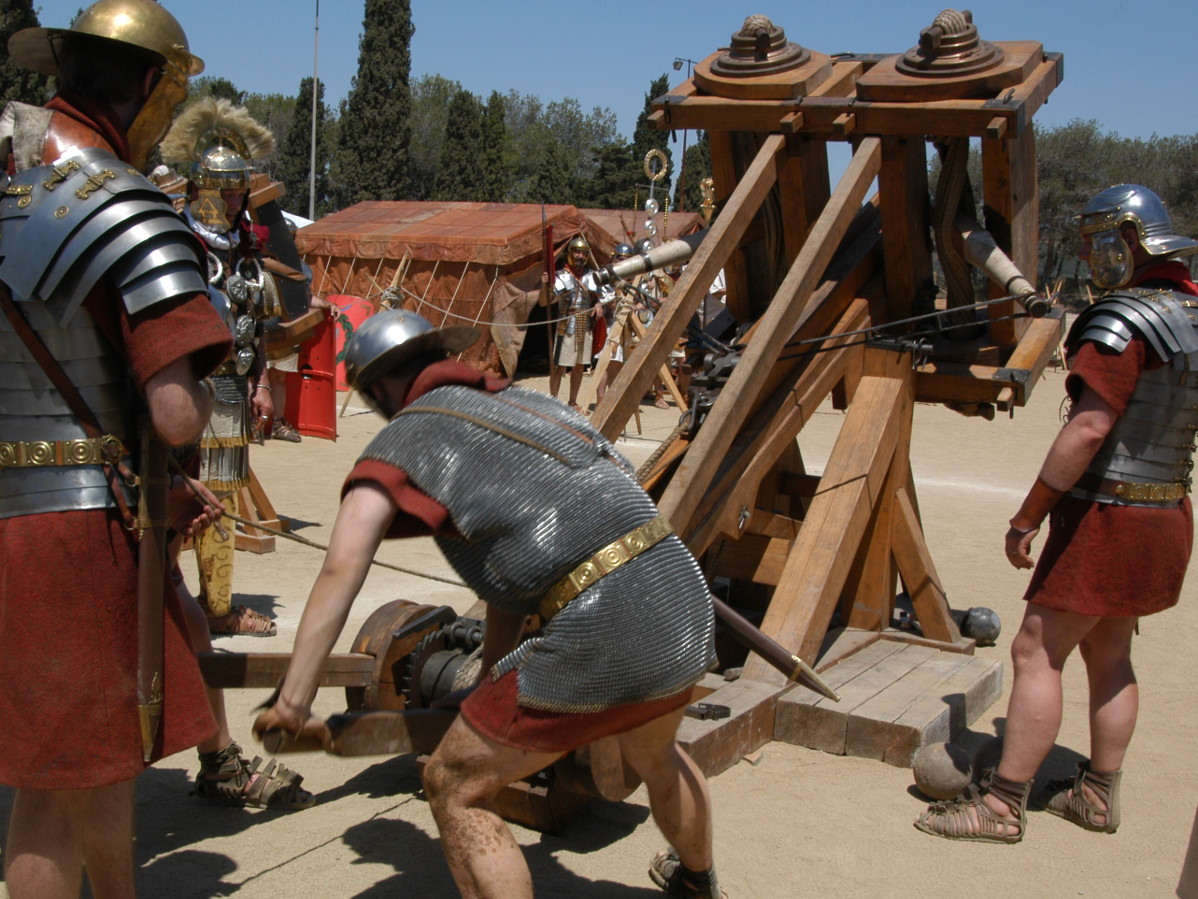 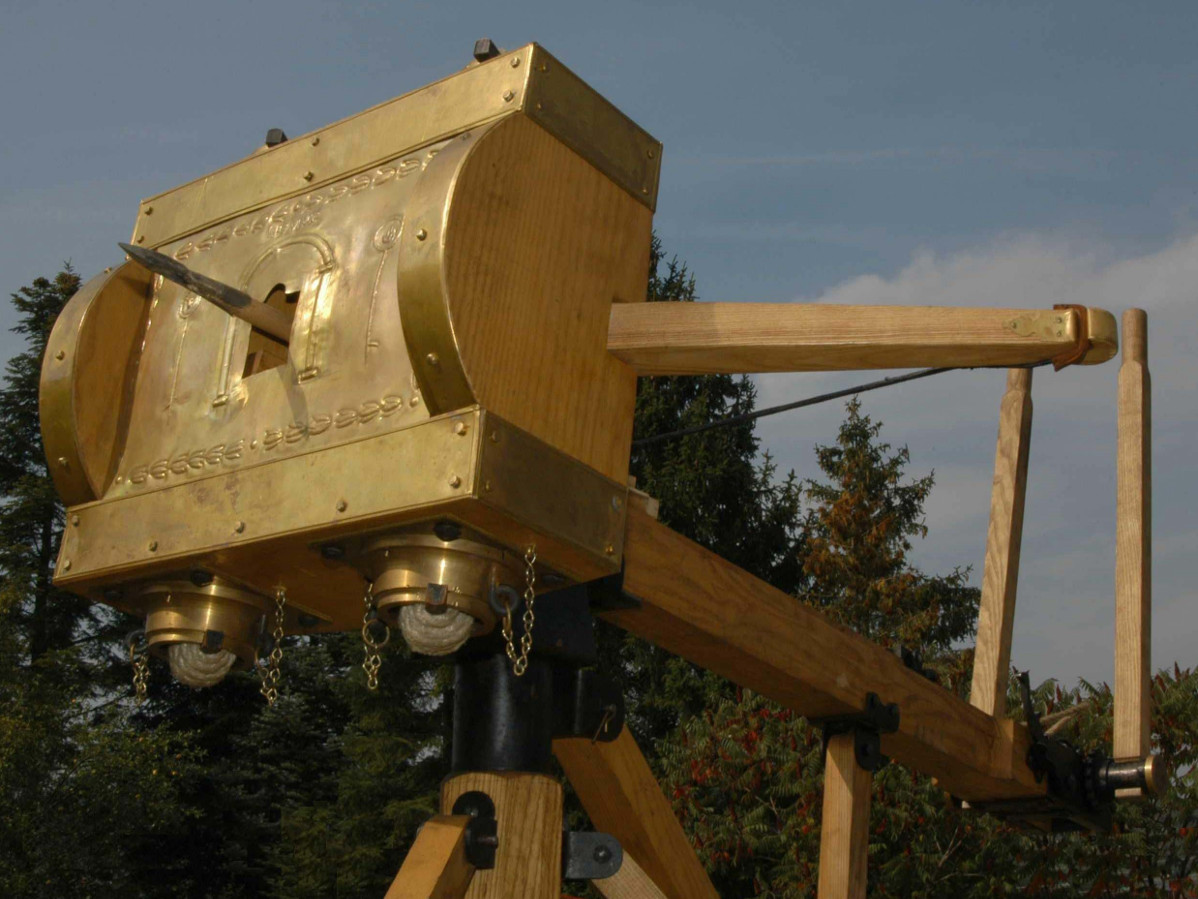 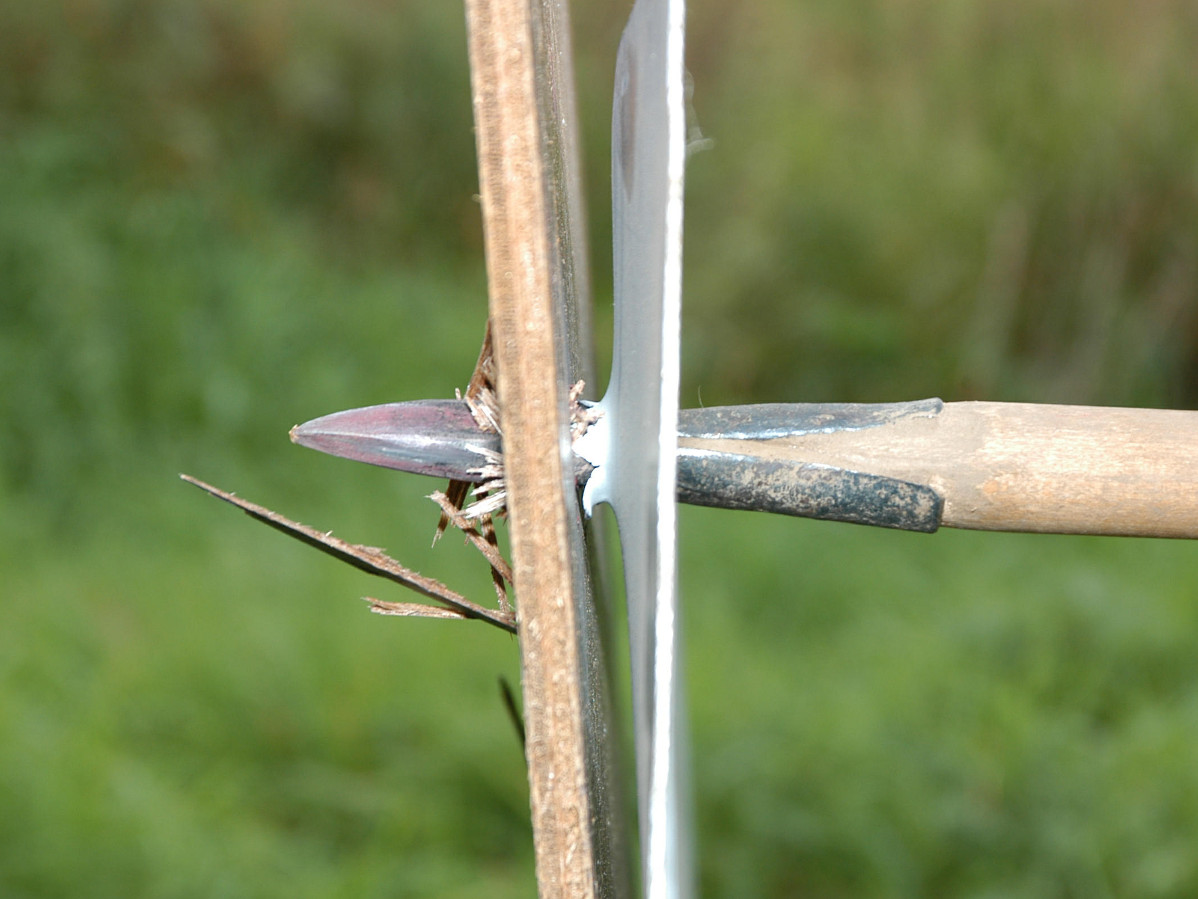