A camp in the distance

Keeping the necessary distance, we pitched our tents in Haltern on 15 and 16 August and baked bread again. Actually the big Roman festival of the LWL-Römermuseum Haltern should have taken place that weekend, but the current circumstances only allowed a small event under the theme "Panis Militaris". Therefore, the Roman field baking oven and some of our leather tents were in the center of attention. The latter stood at a greater distance than usual from the audience and actions like our field forge or the preparation of puls had to be avoided. So the field baking oven was also spatially separated from the camp and the audience was led through a round course. Baking with mouthguards and disposable gloves was also unusual, as well as the contactless transfer of sample portions to the audience.

Although no advertising was made for the event out of caution against a too large crowd of spectators, on both days together there were about 600-700 visitors, who followed all the rules and gave us a lot of positive feedback about our presentation. After the long forced break it was of course a nice new start for us, which makes us want more. 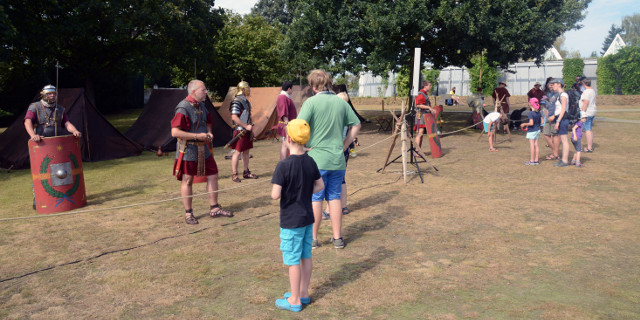 You are here: Home > Current affairs > Latest news > A camp in the distance